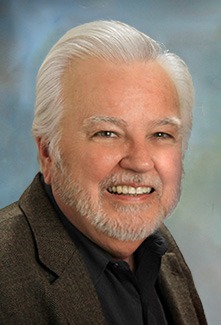 For over three decades, ministers have looked to Dr. David R. Mains as their friend. Many consider him to be a master teacher of effective preaching. Over the years, he has repeatedly proven his ability to gently transform men and women with less than exceptional skills into life-changing speakers.

His background includes a decade of senior pastoring in Chicago at Circle Church, 20 years as Director of The Chapel of the Air radio ministry, winning the 1995 National Religious Broadcasters Television Programmer of the Year award, conceptualizing and writing 50-Day Spiritual Adventures used by over 50,000 churches and more than 5 million people, as well as authoring over 20 books, including Gold Medallion Award winners.

Through Mainstay Ministries and through his Sermon-Coach.com website, Dr. Mains continues to work tirelessly to help pastors create effective, life-transforming Sunday sermons. Dr. Mains believes that the only hope for our age will come through a great outpouring of revival. In the past, God has powerfully used pastors and churches as a vehicle through which He brings revival. The vitality and relevancy of the local church will play a key role in the desperately needed movement of God in our midst.

That’s why Dr. Mains greatly desires to help pastors become as effective as they can be in ministering on behalf of Christ and His Kingdom.

For decades, Karen Mains, a prolific writer and gifted communicator, has offered her talents, as well as her joys and sorrows, to the building of God’s Kingdom.

Whether as an author, speaker, or radio and television producer and co-host, Karen has addressed the deep spiritual needs and longings that surface in our current society. Karen’s voice is substantive, often humorous, many times lyrical, but always practical.

Many of her creative works have been birthed out of personal experience. Her first best-selling book Open Heart, Open Home, is considered a classic and deals with the theology of Christian hospitality. It has sold over 600,000 copies and captured experiences out of 12 years serving in an inner city pastorate in a church founded by her husband, David R. Mains. The book challenges believers to use hospitality as a means of bringing redemption to a broken society.

In 1980, Karen traveled through the barrios and refugee camps in Central America, Southeast Asia, the Middle East and Africa. As a result of these journeys, she wrote The Fragile Curtain, which won the 1982 Christopher Award given to writers, producers, and directors whose works affirm the highest values of the human spirit and are representative of the best achievements in their fields.

Mains’ three books for children, The Kingdom Tales Trilogy, was awarded the Gold Medallion by the Evangelical Press Association. These stories are frequently used by pastors as sermon material, have been endlessly adapted in dramatic form for churches and Christian schools, and have been regularly employed for the purposes of deep therapy by Christian counselors.

Karen Mains served on the Board of InterVarsity Christian Fellowship for eight years and was elected its first woman chairperson. She is the co-founder of the Chrysosostom Society, a group of well-known Christian writers committed to excellence in their work. A past member of the Author’s Guild of New York, she works to reconcile, through a variety of means (one of which is the establishment of Artists’ Communities in local churches), the artist to Christianity. 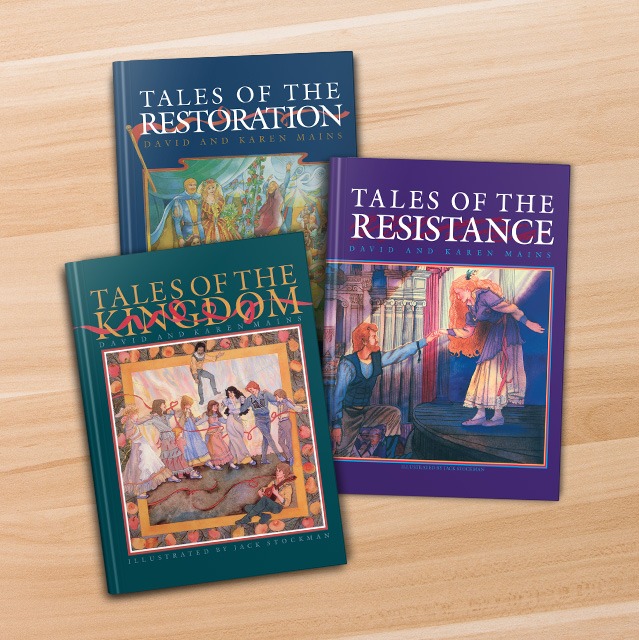 The Kingdom Tales Trilogy contains 36 heartwarming allegories of good and evil from authors David and Karen Mains. Your entire family will be entranced as Scarboy and his friends boldly follow the one True King to overcome the evil Enchanter and his tenacious hold on the oppressed residents of Enchanted City. These Gold-medallion, award-winning books come in hardback format with 12 full-color illustrations by artist Jack Stockman. The illustrations in the “Classic” edition of the Tales of the Kingdom trilogy feature the well-loved illustration-style of children’s fairy tales. Enjoy reading these with your children as bedtime stories, or after-dinner conversation. See the Books

What people are saying…

Our whole family loved this book. We read it at meal time. Many times my kids would beg me to read more than one chapter.

These tales draw us almost imperceptibly into the Kingdom through the open doors of whimsy and invention.

“Love, love, love these books! I read them out loud to my five kids, ages eight down to two, and we all couldn’t get enough. I cried about 87% of the time. Just a warning!”

These stories are a good marriage of fantasy and a Christian Aesop’s Fables. They bring narrative, sight, and sound together to tell a convincing story with excellent moral fabric.

Just like “The Chronicles of Narnia” and “Little Pilgrim’s Progress; “Tales of the Kingdom,” “Tales of the Resistance,” and “Tales of the Restoration” are some of the finest books you can read to your children, while enjoying them, and learning from them yourself!

In the tradition of C.S. Lewis and J.R.R. Tolkein come these heart-warming allegories of good and evil from best-selling authors Karen and David Mains. Reading these inspirational short stories, your entire family will be entranced as Scarboy and his friends boldly follow the one True King to overcome the evil Enchanter and his tenacious hold on the oppressed residents of Enchanted City.

Get Proclamations of Current Events in the Kingdom!
If it’s notable, you’ll get notified.